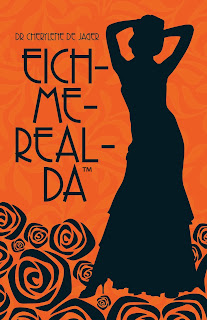 To stimulate and involve the reader, each chapter ends with a few pointers: an aphrodisiac, a Kama Sutra tip, suggestions for mood music, and a recipe for an appropriate cocktail.  Each chapter is also dedicated to the experiences that women typically make. The reader does of course soon come to the realisation that the novelette does not simply stagnate on the sensual level. The sensual level is but one dimension of a more profound canvas that relates to self-empowerment and self-knowledge that Eich-me-real-da is seeking and that she encourages other women to find (p. 31). An exploration of female sensuality (justified in its own right) is just a beginning, the foreground that aims at the empowerment of women as final destination: “I want to assist women to take control of their own sexual destiny at the moment of sensual awakening, or at the very least, to ignite sufficient curiosity to empower themselves with knowledge. Knowledge empowers one and provides one with the confidence to make informed decisions” (p. 157/158).


Cherylene writes easily and tends like Jilly Cooper to produce the so-called “one-liner” with an own dexterity.  The word play is at times subtle and at other times leaves little to the imagination:  “I had a screaming orgasm with a view of the Acropolis!” (p. 108). The novelette presents a pleasant reading experience, subtle, at other times hilarious, but never crude.  The ladies (and in some cases men!) will be swept up by Eich-me-real-da’s research and relationship journey through life in the interest of achieving (self)knowledge and (self)empowerment for every woman.
Posted by Porcupine Press at 13:40 No comments: 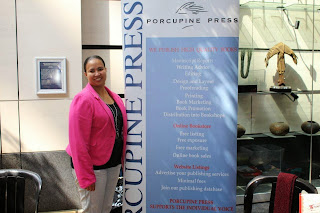 Posted by Porcupine Press at 10:40 No comments: 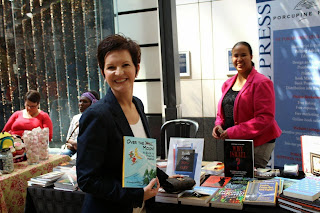 Porcupine Press had an impressive stand on Nedbank’s recent Small Business Market which was held on Friday 6 September at the Nedbank head office in Rivonia Road. Porcupine books were overflowing off the table, and several hundred people paused to peruse them and to take away catalogues and business cards.

Representation at the market is by selection, and is part of the bank’s ‘Vote Small Business: Partnering for Growth’ initiative, which provides a platform.  Approximately 30 small businesses had been selected.

‘It definitely was worthwhile,’ said Clare-Rose Julius, Porcupine’s general manager. ‘It’s all about visibility for our brand. People were handling our books, seeing the quality, and experiencing the wide range of subjects that we cover: from fiction and children’s books, to travel and self-help and political analysis and more.

‘We also sold a few books as well,’ she added. ‘A vote of thanks to Nedbank  who are voting for small businesses like our own.’
Posted by Porcupine Press at 10:35 No comments:

Porcupine Press is about to publish a science-fiction novel written by 17-year-old Johannesburg schoolboy. ‘That’s extraordinarily young to be writing a novel, even a relatively short one of 120 pages,’ says Porcupine’s marketing and distribution manager, Clare-Rose Julius.

The budding novelist is Reneiloe Mabena, and his book is entitled Blaze – the beginning. The subtitle implies that there’ll be a middle and an end. So already there’s at least a trilogy developing in his youthful head.

Reneiloe, widely known to his friends as ‘Nay’, is a Grade 11 learner at St David’s Marist College in Inanda. His mother, Zandile Nzalo, runs her own successful PR company, and his father, Bob Mabena, is the well-known radio presenter from Kaya FM.

The main character in Blaze – the beginning is Thando, a teenage boy who is possessed by a malevolent spirit. Although this spirit threatens to consume his body, it also gives him special powers, which he discovers he needs when planet Earth comes under threat from aliens. Thando faces a big decision. Should he try to free himself from his demons, and risk the destruction of friends and family? Or should he use the demons’ power to save the planet?

The book is available from Porcupine Press's website at R130 excluding postage, and will appear in major bookshops by November.


Posted by Porcupine Press at 12:28 No comments: